(An excerpt from Hiding in Paradise)

Samena descended the stairs in her socks. She heard a noise in her father’s office and turned to see a man facing her father’s desk.
“Who are you?” she asked.
When she stepped forward she saw the two bodies. As recognition of what had just happened took effect, Samena took a sudden inhalation of breath, in shock. The killer stared at her for one long second. Then he grasped the envelope in his left hand and with his right hand picked up the bloody knife and came toward her.
Anger rushed up within Samena and filled her with rage. She sensed the immediate danger while fighting the feeling that she might faint. All went blank for a moment as she felt she was in a white swirling fog. The next thing she knew she was staring down at her dead parents. Her mother’s white face was against the bright red of the blood coming from her father’s chest. Samena’s eyes erupted into tears as she stood over them. She wanted to reach out to comfort them, to fix their twisted bodies, but she couldn’t bring herself to touch them. She wanted to hug them, but the scene before her was too gruesome.
Samena stared at her parents with their lives over and spilling out. A mineral scent assaulted her nose. It smelled like the old metal boats left to rust in the dirty water. She realized it was the smell of their blood. Samena recoiled in horror. Then she saw the killer on the floor. He lay on his back with his eyes open, staring up at the ceiling. Shock hit her for the second time in that one long minute. He looked dead. Had she killed him? His bloody knife lay at his side. The room reeled before her and in her dizziness, she stepped back again to steady herself. When she did, she banged into the bookcase behind her, hitting her head, but this only snapped her back to reality.
She should call the police. She should call an ambulance. She should call the embassy. But it looked like she had killed this man. All she could think of doing was running from any further danger. She ran upstairs and grabbed her blue canvas bag. She threw in her clothes, makeup, and computer. She went to grab her phone, and heard Conley’s voice in her head. Keep your phone off, or at least take out the battery. Better still, don’t carry your phone. As soon as you turn it on, you can be traced. She wanted to desperately call him and ask for help, but at the same time a part of her was still angry with him. She picked up the phone from her charger and turned it off. Samena opened the back of the phone, her hands shaking, and took out the battery. She pushed the charger behind her dresser, threw her phone out her bedroom window, and flushed the battery down the toilet. It was overdoing it, she knew, but she wanted to play it safe. Tears were running down her face, but Samena grabbed Conley’s picture and threw it in her bag.
Then she saw the open door to her parents’ room. She remembered the safe. She dropped her purse and bag on their bed, swung the painting wide and concentrated on opening the safe. She realized her hands were shaking, but it opened. She pushed aside her parent’s wills, pulled out all the money she could see, and threw that into her bag. She slammed the safe shut and closed the painting until it clicked against the wall. 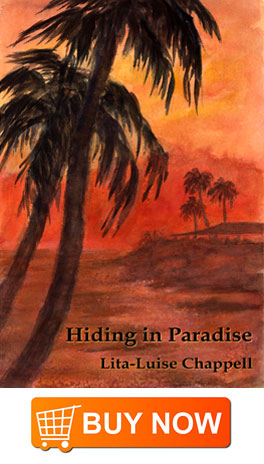 Samena took one last look around her parents’ room and stared at the photo on her mother’s dresser of the three of them, seeing happiness in each of their faces. Then she saw her mother’s short black wig on its faceless head on the bathroom counter. She ran to grab it and pushed it into her already full carrier. Samena ran downstairs with her bag over her shoulder. It banged against her back with each bounding step, as if pushing her to go faster. At the bottom of the stairs Samena paused. Before she could leave, she was drawn back to her father’s office to say goodbye to her parents. It had been horrific, but it would be the last time she would see them. As she stood staring at her father’s gray head and her mother’s beautiful face, she heard the doorbell ring. Samena jumped, then ran to the window and peeked out to see a rough-looking man with another green cap, reaching into his jacket and pulling out a gun. She immediately pulled back, realized that the two men were not from a real flower company, and that the second man would soon learn that she had killed his partner.
Samena turned to run. That’s when she saw the envelope on the floor that the man had been holding. Staring at this plain and innocuous object, it suddenly dawned on her that whatever was inside, it was the reason her parents were dead. She must know why. She picked it up and ran to the kitchen door, unlocked it and ran across the yard. Then, as she had done many times as a teenager, she swung open the wooden slats in the fence and went into the empty lot. Samena slipped through with her bag and ran as fast as she could.