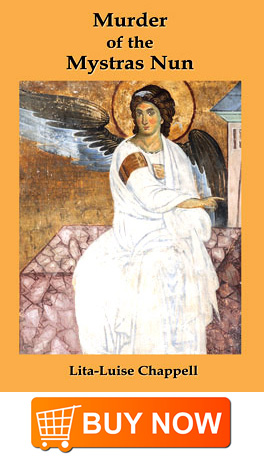 Murder of the Mystras Nun
Book 2 of The Reynard Trilogy

In this second volume of the Reynard Trilogy, Chante and Lucien are about to celebrate their second wedding anniversary when Lucien’s father, Gervais, a well-known European historian, and Chante, his full-time research assistant, are hired to identify a Byzantine princess whose tomb has been discovered in the ancient Greek city of Mystras. Lucien, now an inspector who investigates art and antiquities smuggling, goes along to help. While Chante and Gervais dig through historical files and old chronicles to answer the mystery of the princess’ identity, Lucien entertains himself by reading a Venetian detective’s diary about a nun who was murdered in Mystras in 1715. Caught up in the story of that investigation, Lucien discovers there is more to the tale than just murder, for clues found within the narrative lead all three of them on another surprising historical search. When they finally decide to follow the biblical stories illustrated on the frescoed walls of an ancient Greek Orthodox church, they discover a secret that that could change the world’s understanding of one of the most significant religious stories of all time.

Sister Agatha Terentia trudged up the rocky garden path behind the Pantanassa Monastery that rested on the hillside plateau of Mystras. The morning light filtered down through the clouds, lighting up the upper walls of the ruined castle at the top of the town’s steep hill, which was dwarfed by the peaks of Mount Taygetos that rose behind it. Both the castle and the Pantanassa were more than three hundred years old. Despite their age, Agatha could still feel a blessing of sanctity that helped lift her heart. That feeling, however, was more often short-lived. When she retreated into her small room it was a different story. Countless times she sat upon her narrow bed looking up and out of her narrow window, wondering what it might have been like, not to know what she had learned and carried for forty years.
Continue reading…

“Gripping Historical Fiction!”
Review by Harper Feist
In this book, Lita-Louise Chappell’s intrepid team Reynard: Lucien, Chante and Gervais, find themselves headed for the Greek island of Mystras. At the outset, Chante and Gervais have been given the mission to help identify a Byzantine princess whose body had just been discovered by archaeologists. Lucien, by profession a police investigator, is only along because he can’t bear to be parted from his newly married wife, Chante, so near the date of their anniversary. In a museum associated with the dig, Lucien discovers the diary of a Venetian policeman. He is consumed by the story in the diary – a tale of murder within an abbey, a murder with clear ties to the church. By the end of this riveting book, the reader comes to realize that the Byzantine princess and the murdered nun in diary, Agatha, have some important things in common – important to the history, and perhaps the continuity, of the Church itself.

It is a story within a story within a story. The most external layer is the search for the identity of the princess. Perhaps because it’s academic, it’s a little less compelling than the story told by Lucien of the murder of the nun, which drives the story and actually makes it a little difficult to put the book down at times. However, the diary and search for the princess’ identity lead irrevocably to a discovery about primary resources from around the time of Jesus’ birth that are at the same time shocking and intuitively obvious.

I am not really a fiction aficionado, but I thoroughly enjoyed this book. I especially enjoyed the novelty of learning about the main characters through their responses to historical documents and religious artifacts. I felt a strong resonance with them because of the way they were so immersed and passionate about the history they were studying. They were, at every point in the book, creating bridges between the past and the present (and in one very wonderful and exceptional moment, the future). I would say that this aspect was my favorite thing about “Mystras”.

If you’re interested in potential alternative explanations for events described in the Bible, this is a great read. If you love reading about people who love and live history, this is a real page-turner.