Excerpt: Sticks and Balls: A Sexologist Pokes Fun at Sports

(An excerpt from Sticks and Balls: A Sexologist Pokes Fun at Sports)

Can you guess what is going on in the following description?

A man appeared in a fitted pinstriped suit ready to get a good piece of it for the evening and deliver. He was waiting for a hot box, because when you have it, you get it. He knew it was just a matter of time before he would get a nibble and be ready for that sweet spot. There was no need to pimp himself, just show that he was ready to play. He wanted it high and tight, and up and in with a cock-shot. There was no reason to force his play. He had good wood and was ready to go deep.

You might have thought you just read the desires of a well-dressed man entering a bar and looking for a good time, but you would be wrong. It is the description of a baseball player ready to play, and every expression is a baseball term. Most ball players wear either white pants or a white shirt, or both, with a pinstripe. Getting a good piece of it is when a ball player swings his bat hoping to get a solid hit. To deliver is to pitch a ball. A hot box is the area between two fielders during a rundown. The “I have it” or “you get it” is the call between two players in the field to indicate who will catch a fly ball. A nibble is when a pitcher focuses on pitching to the edge of the plate. The sweet spot is where a batter hits the ball with the strongest spot on the bat. When a player hits a home run and knows he did well, he might swagger or flaunt it to get cheered by his fans. A play is an action during a game. High and tight and up and in, mean the same thing; that is, when a pitch is thrown above the strike zone and close to the batter. A cock-shot is a belt-high fastball thrown down the middle of the plate. To force a play is when a runner must advance to another base because the batter has a runner behind him or when a fly ball is caught and a runner is forced out. Good wood is to hit a ball hard, and to go deep is to hit a home run.
This book is about words in sports that also have a sexual meaning. It exposes the unconscious human need for humans to insert their sexuality into another arena in which they participate, and sports is the perfect recipient. The list of terms for just about every sporting game out there abounds with sexual innuendo and slang. All the sports terms presented in this book have a second meaning.
This book was written for several reasons. They all have to do with what sex and sports share. First, sexuality and sports are two of the most popular activities that humans enjoy. Second, they share the same hormonal responses. Yes, there is real chemistry behind it. And third, as shown in the opening above, a significant number of sports terms also have sexual meaning. In fact, nearly one quarter of the terms in the lexicon of the games listed in this book can be interpreted as sexual. Science and language brings them close together. You could call the two interests natural bedfellows.
There are other reasons to enjoy this book. If you are a sports enthusiast, you most likely strive to be well-acquainted with a sport’s rules, you stay on top of the nomenclature, and you possess excellent historical acumen. An aficionado wants to discuss a sport with perception and insight. Becoming knowledgeable in how to speak about a sport shows a keen observation, proficiency, and expertise on the subject. You don’t need to be a seasoned coach or sports commentator to possess the skill. You only need to learn the lingo. When you add the awareness of a sport’s special sexual language to your commentary, you will not only sound savvy and display a sense of humor, but your friends will enjoy the sport even more.
This book was also written for those who are curious about and fascinated by the oddities of the English language. Within these pages you will be able to feel the frisson of sexual words in sports. You do not need to be a sports fan. All you need is curiosity about words. If you want to express your knowledge with more of a zing, the dual terminology is clear. Or you may want a private moment to simply enjoy a chuckle over some sexual words. It is fascinating to see how our culture has introduced sexual terms into sports, and vice-versa.

As a therapist in the field, it became increasingly obvious to me that a vast number of people, not just clients, have a difficult time speaking about sex and using real terms to describe their sexuality and their desires. I’ll talk about why. Writing this book seemed a good way to openly address these terms. When a person cannot speak about sex, their thoughts and feelings about it can become camouflaged by other actions and sublimated. I’ll express how that can affect an individual. I’ll introduce studies by leaders in the fields of psychology, physiology, and sports medicine that describe how hormones work to activate desire and excitability in human sexuality, in sports with athletes, and in sports fans.
How prevalent are sexual terms in sports games? How many sports games with these terms will this book talk about? How did I decide to focus on the sports I chose? There are approximately 8,000 different sports games that have been played around the world. It would be impossible to cover them all in one book. The task of identifying sexual terms used in every game played would be as long as a set of encyclopedias. A limit had to be considered. I decided to focus on those sports with the most direct sexual connotations—those which are played with a stick and a ball—because they are the most unambiguous words for the penis and testes. Although these two pieces of equipment—the stick and the ball— are male-oriented and the choice for the title of this book, sexual slang terms for female anatomy will also be included.
In the first chapter, Sticks and Balls begins with a look at the development and history of sports around the world that use a ball and a stick. The second chapter will investigate the hormones that influence both sexuality and sports. The reader will discover how certain hormones like amines, peptides, and steroids are directly related to our love for sex and our love for sports. In the third chapter, I will speak about how difficult it is for people to come to terms with real sexual terms.
In the chapters that follow, thirty-five sports will be discussed. Each will include a brief overview of its history and short descriptions of how the game is played, the playing area, and especially the stick and/or ball used. Then those terms which have a second meaning that are sexual will be listed, and the sexual definition will be given. Each of the sexual meanings for these terms were found to be used in the English-speaking countries of Australia, Britain, Canada, and the United States. The sexual words may be terms utilized by professionals, or as past or present slang jargon used by specific sexual groups. All the terms were drawn from the vernacular lingo within these cultures. 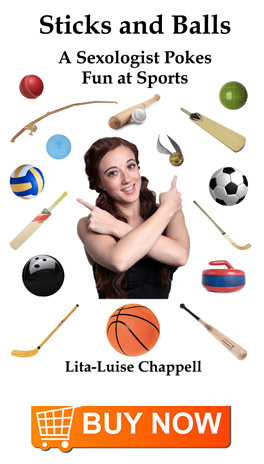 The number of sports terms that also have a sexual meaning was calculated for each of these thirty-five sports, and it was surprising. There are 981 terms listed, to be exact. If you are curious about the percentage of terms which are sexual for any of these stick and ball games, you can find out by going to the last chapter on Term Comparisons, for a breakdown of this information. Which stick and ball game has the most sexual terms within its list of terminology? And which sport has the highest amount of sexual terms compared to its sport terms? Finally, there is a bonus at the end of the book: an extensive list of sexual slang, so that you may see the vast range of secondary words that have been used in place of real sexual terms.
There are things this book will not cover. A complete and thorough historical background for each game will not be given, only a few interesting highlights. Also, specific ways in which a game can be played with all its strategies, rules, codes, tactics, violations, techniques, fouls, and regulations, will not be covered, unless one of the sports terms refers to it, as part of its definition.
In this book you can hone in on one sport, or enjoy learning about the sexual language from each of these stick and ball sports. Discover how much sports and sexuality share, hormonally and linguistically. Each game creates a common base for understanding why sports have become so important to our species, and even more interesting, how sports reflect the sexuality in our culture. By the time you finish this book, you will be an expert on the use of sexual terms in the most popular sports using a stick and a ball. Have a stroking good time!