An excerpt from The Thelemic Cookbook: Cooking with Correspondences by Lita-Luise Chappell

This is a menu in honor of the birth of our prophet Edward Alexander Crowley, who later changed his name to Aleister Crowley. He lived an extraordinary life, accomplished an astonishing amount of writing, and experienced a lifetime of magical experiences. It’s an honor to pay homage to that star among stars that worked the magic of the spheres and opened a conduit for the shifting the aeons. His depth of character was obviously complex, so this menu will offer complexity. We must keep to our task in utilizing magical correspondences by looking at his birth astrologically with his planetary and astrological influences, and then draw from his diaries of travel and gustatory experiences in his life and time.

It was early October in the town of Leamington England, getting late into the evening in 1875 when young Alexander was born. His father, Edward, would probably have gone to the 9:00 PM Plymouth Brethren Bible Study Meeting to pray for his wife’s safe delivery. He probably returned home and waited in the next room for the birth like any would be father of his time. After the birth and the viewing of his new son, he no doubt left the care of his child and wife in the hands of a midwife for the next few days, and soon would have gone out to celebrate with a good meal. A sample of what he might have eaten is what makes up this menu. Members of the Exclusive Brethren, even more conservative than the rest of the Plymouth evangelical, did not partake normally of drink or smoke. However, his father did die of tongue cancer when Alexander was only eleven years old. Strong cigarettes had been on the market since 1856. Edward’s family business had proved financially rewarding for him to retire before Alexander was even born. Edward was not one to drink beer, but Crowley does remember him drinking some wine with dinner. That night Edward might have sipped a small glass while waiting on the eve of his son’s birth.

Crowley’s father was ruled by Acts 15:29, which reminded its adherents to abstain from foods sacrificed to idols, from blood, and from the meat of strangled animals. He may or may not have closely followed that rule. This was the time of the Victorian era, when Queen Victoria ruled from June 1837 to her death in January of 1901. Available vegetables at the time were onions, leeks, watercress, Jerusalem artichokes, carrots, turnips, cabbage, and beans, among others. Fruits included apples, apricots, bananas, blackberries, currants, blueberries, cherries, figs, gooseberry, grapes, melons, passion fruit, pears, plums, pomegranates, rhubarb, strawberries, and most citrus, which were often dried or candied, and used for puddings and cakes. Dried legumes were consumed all year long, the chestnut, hazelnuts, and walnuts were popular, but also almonds, Brazil nuts and coconuts were imported. For fish, herring was most popular, but also white fish, sprats, eels, shellfish, cod, haddock and John Dory. Meat on the bone, stewed or fried, was the most economical form of eating beef, lamb and pork. Cuts of joint meat were served, along with brains, heart, sweetbreads, liver, and kidneys. Pork was the most common meat eaten. Eggs, chicken, diluted milk, and hard cheeses were readily available. A low alcohol content beer was the usual beverage, but sometimes port or sherry, were served in the best of homes.

The inventions of the time that most influenced food accessibility were trains and steamships delivering fresh foods faster. Sugar imports increased at this time. The rotary can opener was invented in 1870, making the use of canned foods, also new on the market, more popular. Margarine was developed because it was cheaper than butter. Digestive crackers became available, and milk chocolate was first introduced in 1875. Custard had been around since 1837, and gelatin molds since 1845. Fish and chip shops had been around since 1840. Mass production of cakes, biscuits and jellies began in the late 1800’s, and although puddings had been traditionally made with meat drippings, now they were taking on a sweet flavor, and a wide range of foods were becoming available. 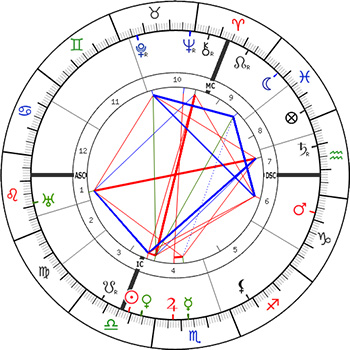 A consummate astrologer would be able to analyze Crowley’s birth chart far better than this simple interpretation, but here is a basic examination to give the reader an idea of the influences that were present at his birth.

Crowley was born in the sign of Libra (Sun in Libra 19°14′), which means that here is a man who is mentally stimulated by the social world, who has the desire for world harmony, and the chutzpa to change his social status. This man is best suited with a partner to aid him in his work. His Venus is also in Libra (24°25′), so he is drawn to the beauty and pageantry of art and music, theater and fashion. With having his Moon in Pisces (22°48′), he is sensitive to disharmony or may even create it to make a point. He is very intuitive, able to naturally feel at home surrounded by art and music, and often with interests beyond the normal, as it is in the eighth house of such hidden matters.

With Mercury in Scorpio (13°22′) this person is also naturally secretive and loves to dwell in the mysterious, will embark on his own research, and become involved with things of an occult nature. With his Jupiter in Scorpio, how could he be other than peculiar and puzzling, secretive and mysterious, and wanting to examine the underbelly of society, all the while appearing charismatic, magnetic and alluring.

Leo is his rising sign, with Uranus in Leo at (19°08′). Here, confidence and pride are present to the extent that the intellect is always looking for more and pushing further. He was quite strong with his Mars in Capricorn, where he could be fixated on completing large amounts of work in a short time, but he could also be manipulative and controlling, skeptical and untrusting of others. His Saturn in Aquarius (19°31’R), makes him the searcher, the experimenter, the obsessed, who can come to a practical application to a practical problem, but because of these qualities, could also prove unpredictable.

Aleister was also born at the same time as a rare Jupiter and Venus Conjunction, an astrological signifier of an expanding and loving combination. Astrologers describe a person born at the time of this conjunction to be indulgent with love, pleasure and money, often living beyond their means. When they become conflicted in love relationships, they need time to recover and regain a spiritual equilibrium.

In this menu dedicated to Aleister, elemental foods are offered that most closely apply to those planets and signs. Here are foods that celebrate the diversity of the man he was in the food he and his father might have enjoyed. There are foods of the autumn season that were available in England in the late 1800’s, so foods of air will predominate.

On the following pages are the full menu for ‘A Feast for Crowley’s Birth and lesser feast’, as well as sample recipes from some of its courses, read on to continue: