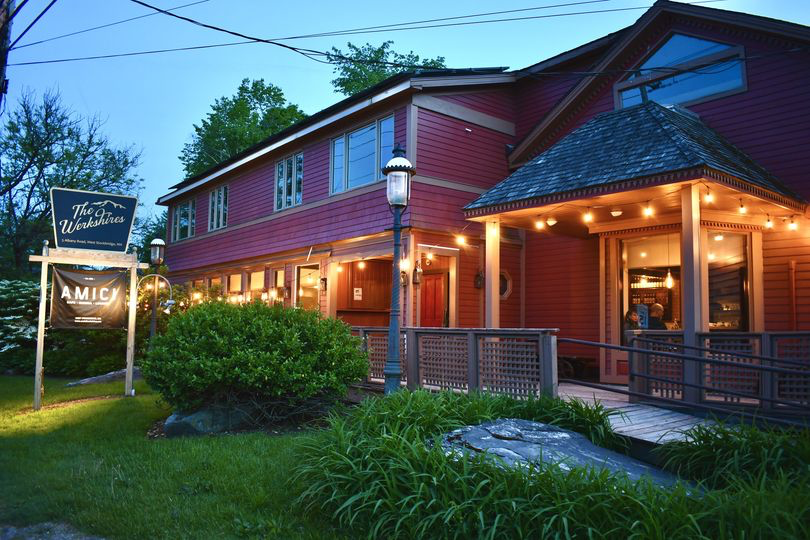 We were recently visiting West Stockbridge and staying at the Shaker Mill Inn. Online, there seemed to be only three restaurants in West Stockbridge, proper: one is a café only open until 3:00 pm; another is, or was, a restaurant called Rouge, which has closed its doors and is up for sale; so that only left one, what used to be called the Shaker Mill Tavern, but is now called Amici. Since we wanted somewhere close for dinner, it was the only place left to go to. It offers southern Italian food, which we enjoy, so we were looking forward to a good dinner.

We were seated with menus in a small alcove, which gave us privacy amidst a busy Friday night crowd. After a couple of minutes, we had decided what we wanted to order, but did not get a wait person. Near us was a wait station, and three times, various people who were retrieving settings from there, looked in our direction and said hello, but none were our waiter. Now, I know in this time of Covid that there can be a shortage of wait staff, so I do not entirely fault the person for being so late to our table, but he could have quickly apologized in his rushing and said he would be with us as soon as he could. He finally came and took our order.

My husband ordered the Fettuccini Alla Boscaiola with sautéed mushrooms, sausage, and truffle cream sauce. The menu or the wait person should have let the diner know what kind of sausage it was, but did not. It was fortunate that my husband would eat any meat, but I would have not. When he received it, he said it tasted good.

I ordered the Fettuccine Al Pesto with a creamy pesto sauce, and a side of sautéed broccoli rabe. “Sauted” is misspelled on the menu, by the way. I was intending to cut up the tender florets and add them to my pasta. When the broccoli rabe arrived it was a large portion, but some of it was hanging off the plate. A busy night can produce a sloppy dishing. No matter. I also noticed that the stems were quite thick, and had not been properly trimmed for serving. I tried to cut the florets off, but they were so tough that it was impossible. I managed to cut through some only at the tips and added them to my pasta.

Then I took a bite of my pesto dish. I’m a chef. I look at the dish before me, take a bite and then I close my eyes to gauge the flavor. Had I received the right dish? I could discern no basil flavor, nor could I taste the cream, yet there were green specks in the dish. Perhaps the sauce had gone to the bottom of the bowl. I mixed the pasta up and took a few more bites. The few rabe ends were okay, in their natural slightly bitter way, but there was no basil flavor, no heavy cream, no cheese and it needed salt. Just a couple of pine nuts on top would have helped. There should have been at least some Parmesan mixed in with it. Fortunately, I had foreseen not having enough cheese so had ordered a small amount with my dinner. After a couple more disappointing bites, I left the remainder of the pasta and the rabe. Why eat something not good or gain the extra calories?

When the waiter came to take our plates, I told him the problems, but I sincerely doubt that he relayed anything to the kitchen. The rabe should not be charged to our bill. It was inedible. I had a few bites of the pasta, so he could charge for that. Simply said, I was disappointed in my meal. The waiter offered to have the rabe cooked more, but that would have been pointless. My husband was done with his pasta, and I was not interested in ordering another dish.

We decided to order a dessert to see if the chef could at least appease us with something sweet. We ordered a panne cotta to share. It came in a martini glass and was topped with a berry reduction. It was not good, in fact it was rubbery, and not creamy as it should have been. The berry reduction wasn’t even sweetened. It was left unfinished.

Perhaps I had ordered the wrong things on the menu? Maybe it was an off night for the chef? If only the chef had properly prepped the rabe by blanching it ahead of time? But it was too late. To add to my comments, my husband ended up having terrible heartburn later that night. Amici means “friends,” but I would not recommend this restaurant to my friends. Next time we happen to find ourselves in West Stockbridge and want dinner, we are driving out of town.