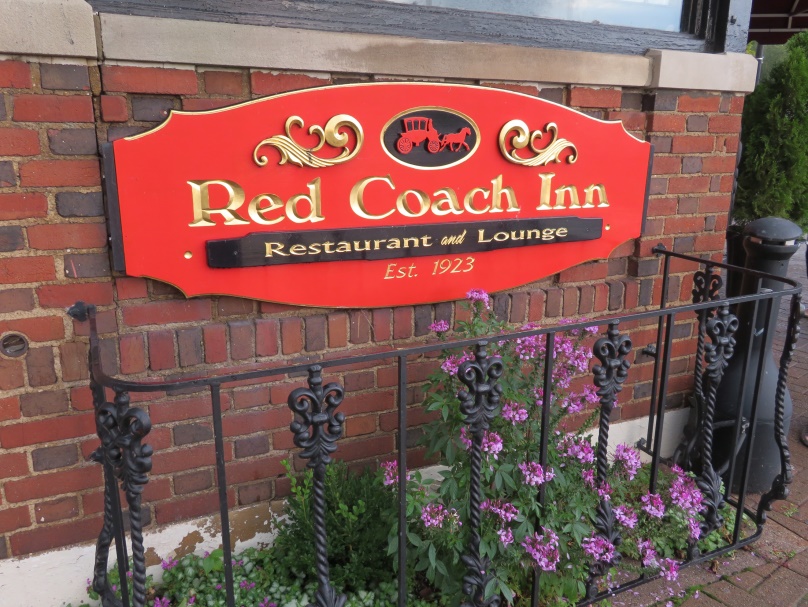 One of the highlights of Upstate New York is the iconic Niagara Falls. It was on my bucket list of things to see, so when a recent trip to this part of the country was planned, this was one goal. The Falls lie on the American and Canadian border, so they can be viewed from either side, but since my husband and I were concentrating on seeing New York’s upper regions for autumnal colors, we decided to stay on the American side at the Red Coach Inn. 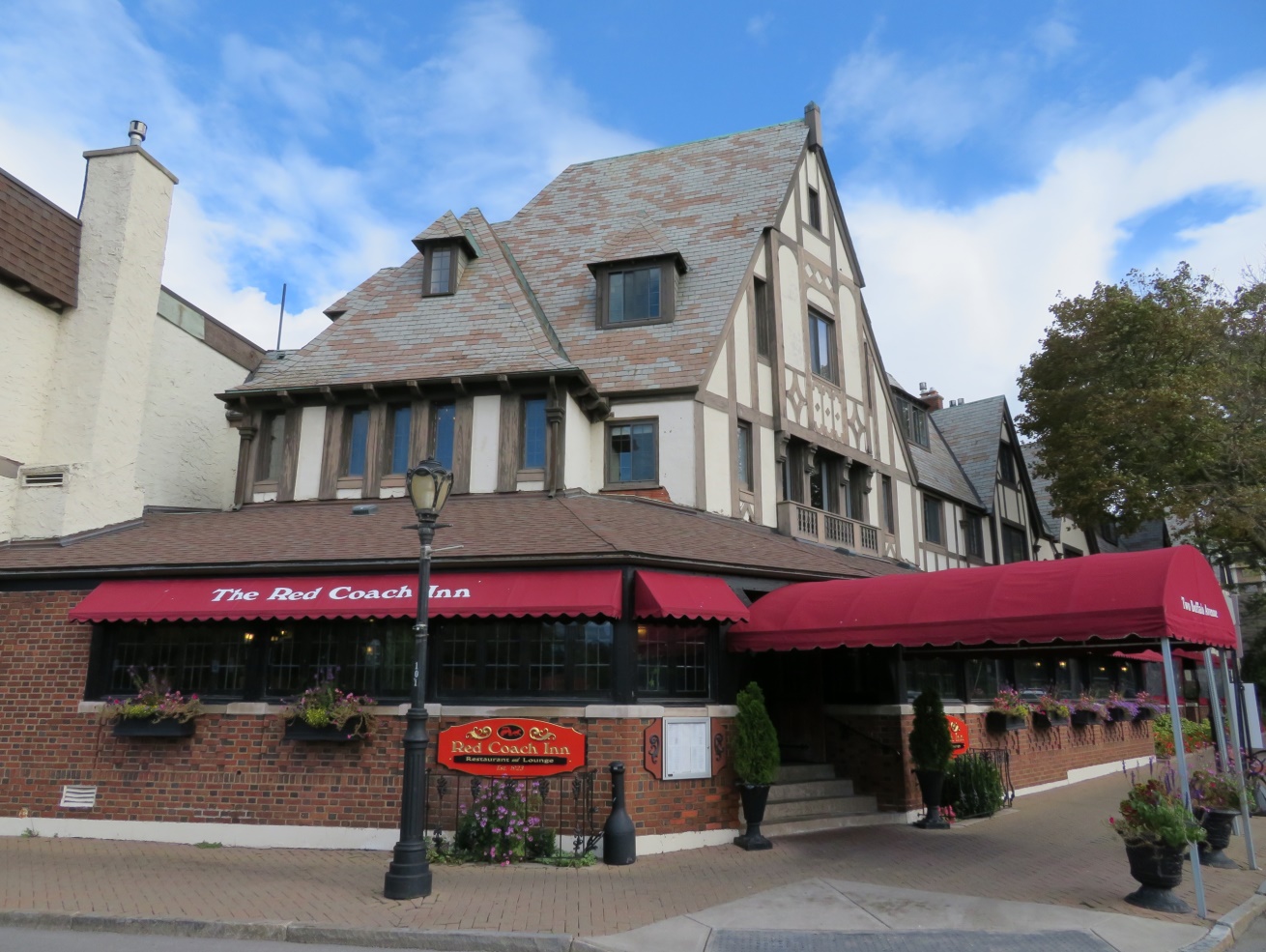 The Inn first opened its doors in 1923, with the Fall’s upper rapids just outside its front door. This old-English Tudor of three and one-half stories, was fashioned after the Bell Inn of Finedon, England. The inn gets its name from a painting by A. Rafael Beck, of General LaFayette’s red carriage, sitting in front of Eagle Tavern, a place that no longer exits. The painting hangs over the fireplace in the dining room.

We booked the Portsmouth Room with a king size bed, a refrigerator, and the bonus was the large Jacuzzi jetted tub within the bedroom. The furniture has been moved around from what is shown on the website, but it was comfortable enough, and had a rose pink two-seater couch at the bottom of the bed. However, the bedside table on the right side of the bed and the wing chair shown online are no longer in the room. With this shortage of table and chairs, my husband and I had to share when we sat and were able to write at the desk. I wasn’t terribly impressed with this room and wished we had booked within the inn, proper, as this one faced the parking lot; easy to load and unload, but offered no view like the ones on the second and third floors. Also, the room is not connected to the hotel proper, so one must walk around the building in order to get into their restaurant. Add to this the fact that it rained while we were there, which made the room inconvenient.

What made our two night stay more conducive was the convenience and good offerings in their restaurant, which offered breakfast, lunch and dinner. We booked dinner reservations for our first night, although in the off-season, it didn’t seem necessary. That could have been due to the still lingering pandemic. We entered what looked like an old-world Tudor dining hall with high ceilings, decorative chimney masonry, and dark wood timbered beams against white walls with small prints. There were some booths along one wall with orange upholstery, where we were seated. The dining chair upholstery and the carpet had a similar diamond-like print of red and black.

We opted to have some wine, with one glass of Prosecco and one of San Michele’s Gewürztraminer. We shared a Bibb salad of Riesling poached pear, candied walnuts, goat cheese, and dried cranberries, with a maple fig dressing. It was delicious and I could have just had that whole platter for dinner. My husband ordered the surf and turf of a four ounce grilled filet mignon, a four ounce lobster tail, with Hollandaise sauce, drawn butter, roasted baby red potatoes, and sautéed yellow and zucchini squash. I had the crispy Asian tiger shrimp with a spicy mustard and orange sauce. Our waitress Maris, was very sweet and served us well.

The next morning my husband slept in, but I went to have breakfast. I enjoyed their crème brule French toast and a cappuccino. While sitting there, I looked out the window to the street and watched a line of Canadian geese waddle and pad single-file down the middle of the street. After all, this was their home, too. After breakfast, I walked to the Fall’s embankment, just across from the hotel, to watch the rushing water. I was inspired to write about the Falls, which can be read in another review on Niagara Falls, itself.

A while later, my husband got up and said he was hungry, so we went to have a late lunch in the Red Coach dining room. My husband had the half pound Angus burger and fries, and I had the spinach and artichoke dip with French bread and the blueberry spinach salad. The salad wasn’t as rewarding as the pear salad the night before, but it was still good with walnuts and goat cheese.

On the second morning for breakfast, I had the three cheese omelet with rye toast, country potatoes and a cappuccino. It was, as well, very good. The restaurant got busy, but I hung on reading the Niagara Gazette which is always available at the front counter. I was surprised to see two articles on local murders and that six people had died in one week. It seemed a tiny town to have all that happen to it.

The entire time that we were there it rained on and off, but we still got to see the Falls at night with the colored lights and fireworks. We did hear that some people have seen a ghost or two along the upstairs corridors, but hearing such things only adds to the enchantment of an old inn. Although the weather was not with us while there, the room was warm and cozy, and it was good to be able to eat onsite at their restaurant with good food for any meal, served by a friendly staff.