It is debatable what constitutes upstate New York from downstate, but primarily, upstate does not include New York City or Long Island. The goal for my husband and I was to visit family in northwest Massachusetts, cross a corner of Vermont and then head into New York to see the Berkshire, Catskill and Adirondack autumn colors, the Finger Lakes, Niagara Falls, and whatever else we could find along the way. That sounds fairly general, but in actuality, we did plan every day of our trip as we needed to book B&Bs along the way. The slower autumn shoulder season for New York state may be September and October, but that’s exactly when people choose to travel, because the heat has passed and the fall colors are beginning.

After the flight with one layover, and still feeling the need to wear masks onboard, it was a relief to finally arrive and get on the road. We rented a car and made arrangements to meet up with my husband’s brother, who was on his own getaway, and suggested that we meet at the Olana House and Park along the Hudson. This was actually supposed to be the last stop on our trip, but when we arrived we were able to get that part of our ticket changed. We could go on the 45-minute downstairs house tour today, and save the electric car tour of the grounds for when we return. There is also an upstairs tour which visitors can take, but we chose not to go on that. 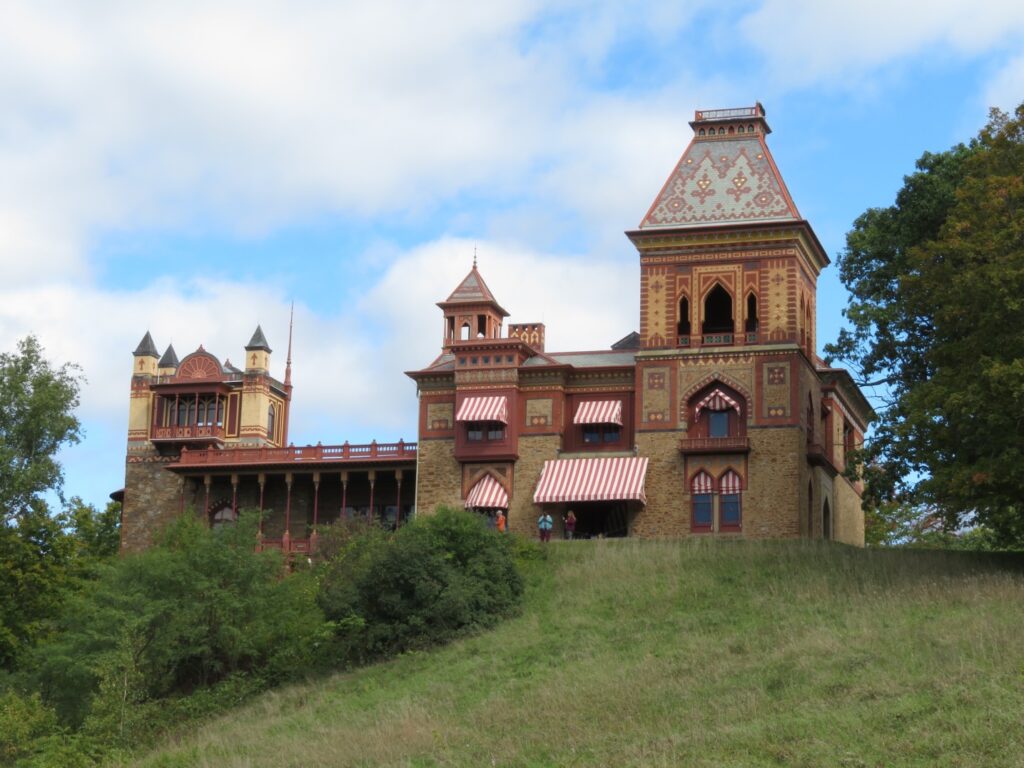 The Olana House was built by Frederic Church, beginning in 1869 and was finally completed in 1891. He married a woman named Isabel and they had four children. Church was a world traveler, architect, farmer and landscape designer; but he began as a painter, trained by Thomas Cole beginning in 1844. Thomas Cole is known for founding the Hudson River School of landscape painting. Church’s favored subjects to paint were landscapes of Vermont, Maine, and Connecticut. The design of the house comes from his travels, transferring aspects of Victorian and Middle-Eastern architecture, built mostly with block masonry with tall towers, Oriental windows and fanciful porches. A detailed review can be found here.

Our next stop was to drive to the top of Greylock Peak’s summit. On the way we saw some wild turkeys waddling alongside the road, which became a common sight. Then a deer crossed the road ahead of us, as it was what we termed “deer o’clock,” occurring at the closing dusk of the day. The sky was very gray and overcast, which soon turned into rain, so we did not linger, but went down the other side of the mountain to visit more family. Vere’s sister and her husband have built a beautiful two-story log cabin in North Adams. We spent the evening visiting over dinner.

That night we headed to our first place to spend the night, a small motel in Williamstown, but left early the next morning to continue our drive. We headed north to Bennington, Vermont, and stopped when we saw a barn store on the side of the road. The sign said it was the Apple Barn. Outside in the parking lot was a tall wooden-carved black bear and in front of the store was moose statue painted blue. We went inside, and indeed there were apple products, as their farm was only two miles down the road. We were surprised to see hickory wood syrup, and bought a bottle, wondering how different it would taste from the more traditional maple syrup. We discovered later that the flavor difference was subtle. We got an obligatory fridge magnet, and some pumpkin pie fudge. 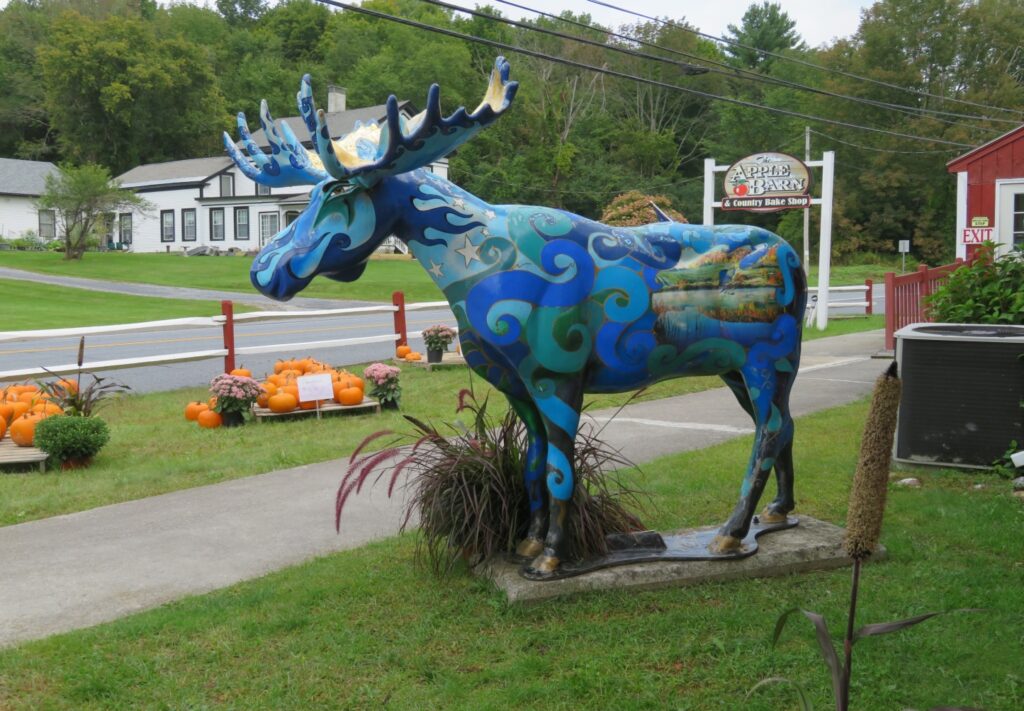 Then we drove on to the town of Bennington to see the Bennington Museum, which houses the largest collection of Grandma Moses’ art, along with other artists that portray the culture of northwestern Massachusetts, southern Vermont and New Hampshire, and eastern New York state. There were quite a few artists’ works there, mostly of paintings. Grandma Moses was one of the most important 20th century artist in America. She was self-taught and specialized in primitive folk art, showing idyllic depictions of rural Vermont life. All her works were of past rural landscapes in all seasons, with old barns, horse and buggies, children playing, and people going about their business. 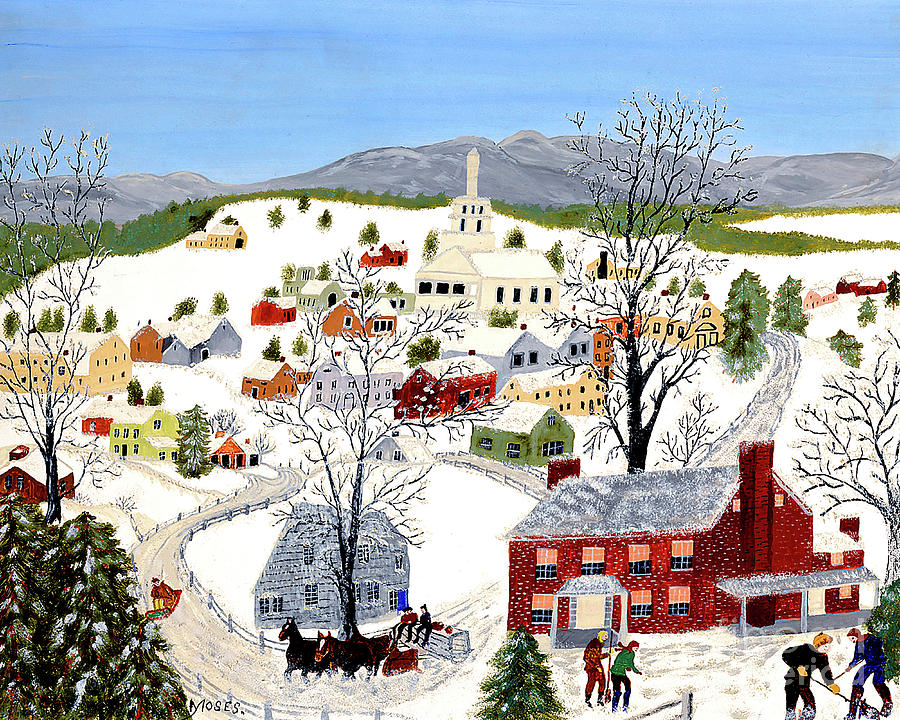 Our favorite room in the museum was the room of curiosities, which had a room full of old items from that period of time: household items, kitchen tools, sewing machines, sugar cutters, dolls, clocks, the first lightbulbs, sleds, photographs, weathervanes, ship models, paintings, typewriters, and bottles, some which were horizontal used for feeding babies. There was a case full of old Masonic gear that included the trowel that put in the corner stone of the Bennington Battle Monument in town. Another room had old cars and street signs. A museum review is here.